This has been on my to-post list since the beginning of Dear Guts. I just removed my previous cashew sour cream post from 6 years ago (cultured with apple cider vinegar cuz I was literally still a baby with lots to learn) because this one here is the one cashew sour cream recipe to rule them all. It has veery close to the same amount of calories, fat, protein and carbs as traditional sour cream, making it as perfect of a replica as you can get (except hold the animal abuse, cancer causing hormones, dire environmental destruction, nutrient blocking effects and inflammatory compounds). Making it at home also allows you to make it as tangy as you want it to and culture with your favorite strains of probiotics. I’ve made these hashbrowns with sauerkraut and cashew sour cream, which are full of pro- and prebiotics and so good for your gut, more often than nearly anything else so I’m glad it’s finally getting it’s time to shine!

Potatoes are as close as it gets to a perfect food, containing all the essential amino acids and are a good source of vitamin B6, potassium, copper, vitamin C, manganese, phosphorus, niacin, dietary fiber and antioxidants. Humans are starchivores, our bodies thrive when eating predominantly starches and they’re a big part of what made us humans. “Unlike our fellow primates, modern humans have many copies of a gene that makes a protein in our saliva that is crucial for breaking down starch into glucose, which is what our brains run on. The shift to eating corms, bulbs and tubers, which you can store all year, gave our ancestors enough sugar resources to develop a large brain.” Historically, all successful civilizations got the bulk of their calories from starch, with animal products making up about 10% of their diet. More recently in human history, Okinawans, which have long been considered the healthiest population on the planet, diet was made up of 70% starch. For more information on that, check out Mic The Vegan’s video called Humans are Starchivores and read the book The Starch Solution by Dr. McDougall. It’s fascinating and liberating to learn that the foods I am most attracted to, which have been wrongly vilified my whole life, are what our bodies have evolved on and operate best on. 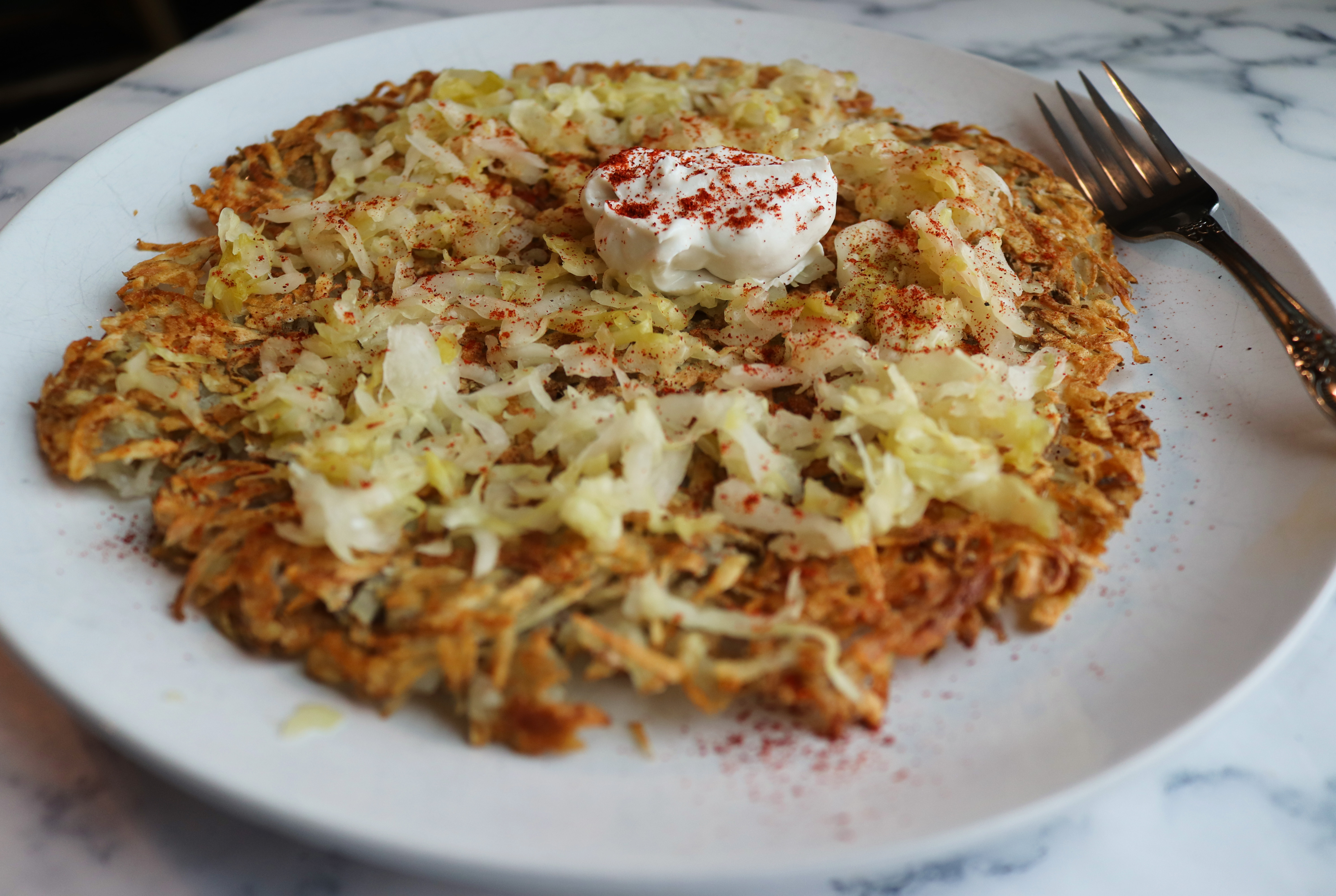 Look at that dollop! This vegan sour cream is incredible and costs only ~$1.50 per batch. I also really suggest making your own sauerkraut. It’s such a rewarding process; easy, cheap, relatively quick and soo much better than store bought. Here is my recipe for it.

1 medium russet potato, washed and grated over a large bowl

~1/4 cup of sauerkraut, with all the excess liquid squeezed out

Preheat oven to 420. Rinse the shredded potato by adding water to the large bowl and agitating. Strain out the potatoes (and optionally save the leftover water to harvest the residual starch from) and squeeze all the water out as well as you can, the drier the better. In an oven-safe skillet over medium heat, add the olive oil and stir to make sure it’s evenly coating the pan, then add the shredded potato in an even layer. Press down with a spatula, then add a few pinches of kosher salt. Let cook for 4 minutes, then flip. Put in the oven and cook for 15 minutes. Top with the sauerkraut and cashew sour cream

*You can make the hashbrown completely oil free if you have an oven safe non-stick skillet. In that case, don’t rinse the starch or squeeze the shredded potatoes, as the extra moisture will help prevent them from browning too quickly. It won’t be as crispy but it’ll be every bit as good in its own right, I don’t miss the oil whatsoever!

1/2 cup almond milk (you can sub with just more water, but I like the flavor from using both nut milks)

pinch of kosher salt to taste

In a blender, add the raw cashews, refined coconut oil and tapioca starch. Cover with the boiling water, then blend for a few seconds before adding in the almond milk and salt, then blend on high until very smooth. Let cool completely before stirring in the probiotic capsule, then let sit at room temp for 1-2 days or until it has reached the desired level of tang.

Instant version – Use 1 tbsp lactic acid powder to get the tangy flavor without needing to culture it. I get mine from Druid’s Grove and is made from beets.