This post has been a long time in the making – I took the first pictures for it on March 19th, nearly 3 months ago. But all good things take time – and this, believe me, is very, very good. It certainly helps that it’s also practically free.

If you know me and my boyfriend well, you know of his purchasing habits at a certain market on the southside of Milwaukee. It’s become the subject of banter between us, something we joke about with friends when a lull arrives in the conversation…”would you look at all those damn pears he’s left me to fend for”. It’s funny because it just keeps happening. No matter how rotten and truly melancholy looking the fruit/vegetable is, he always thinks it’s an alarmingly good deal, like he’s getting away with something. Everyone else can see that these pears were very appropriately priced at $2/bushel. These pears reminded me of the Cards Against Humanity card ‘Rush Limbaugh’s soft, shitty body’…only softer..and shittier.

One of the things that makes us a strong couple is that his madness always brings out the best in me. I wish I could say the same in reverse, but I feel like my madness has only brought out a constant fear of a bedbug problem waiting to happen, endless answers of ‘neither’ to my what would you rather do questions and his inability to sleep through the night due to my sudden concern something terrible has happened to my penguin backpack/where’d all these starfish come from and let me quick turn on the light to check. He can be an honest-to-god maniac at times but sometimes his delusions just involve thinking he’ll find a use for several pounds of honest-to-god awful pears. And that, my friends, is how pear cider vinegar is born.

The benefits of consuming vinegar are endless and easy to verify. Just a tiny sip of vinegar and your upset stomach will vanish. Take a sip before eating something sweet and you won’t get the familiar crash afterwards since vinegar balances your blood sugars. It gets rid of dandruff, helps sooth sunburns, is great for sore throats and, super importantly for properly digesting minerals, it helps balance your body’s pH. It’s just as helpful around the house as it is for your body – it’s a non-toxic cleanser due to its antibacterial nature, odor-eliminator and a natural weed killer.

There aren’t many days that go by where I don’t eat something containing vinegar. I take advantage of its reaction with baking soda to create super fluffy pancakes, it perfectly tenderizes meats and is a base of every salad dressing and in all my sauces. Vinegar’s sour taste is crucial when creating a full flavor profile in a dish. Sample a dish before adding vinegar and you may think ‘there’s something missing’ and not know what. It’s very likely vinegar.  Even sweet things, like desserts, are left incomplete without a sour element. 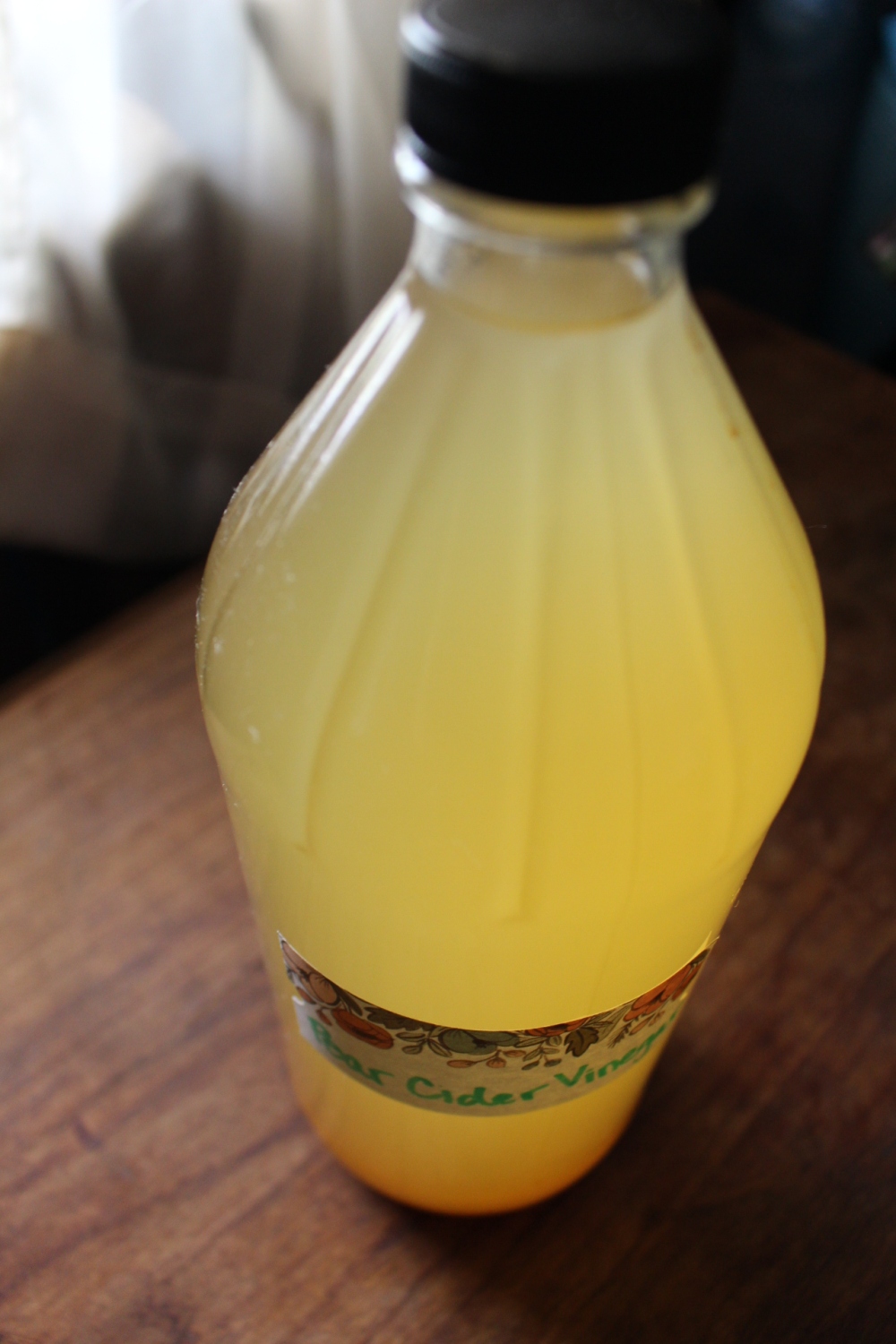 At the beginning of the post I said that this is practically free because it only uses scraps you’d usually throw away (or, hopefully, compost). I made 3 gallons of vinegar from just the peels,  cutting off the bruised bits, and a little bit of sugar. The good parts of the pears you’re free to use however (you could try this recipe here: Peach, Plum, Pear Crostata: An Ode to a Favorite Song). If you’re familiar with making kombucha, making vinegar is almost exactly the same but you replace tea with fruit. I let this ferment ~2 weeks, waiting until it got so bubbly I could practically hear it rumbling from the other side of the kitchen, before straining it. Then I reaaally fermented it, for about 2 months, until it was sour but still sippable. Good vinegar isn’t cheap, at Whole Food’s the median price is ~$7/liter meaning I made $70 worth of vinegar for pennies.

Make sure your pear peels are cleaned well. Add them to a large jar along with the sugar and water. Cover with a cheesecloth/towel, secured with a rubberband, and let sit in a cool, dark area for 1-2 weeks. Once it’s nice and bubbly, strain out the solids. Return your liquid to the jar, cover and again let sit in a cool, dark place..this time for 1-2 months. Taste at the 1 month mark. If it’s still sweet, let it keep fermenting. It’s done when it has some bite to it but still has a pear flavor.