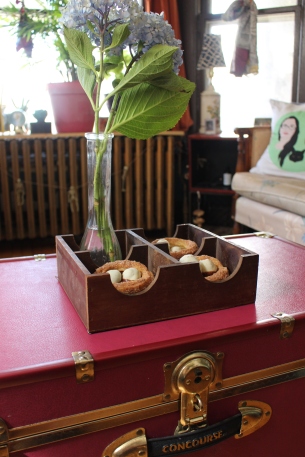 These little churro nests are the product of a lot of daydreaming and it’s obvious those dreams were filled with thoughts of spring. It wasn’t until I was playing with the dough that it came to me. It looks so much like a little nests! They are, without a doubt, one of the best things I’ve ever eaten and not difficult to make at all. Churro dough is one of the easiest I’ve ever worked with – it’s practically modeling clay. To make it even easier, you could use Nutella and a couple of pre-made cupcakes instead of making your own cake for the eggs. The eggs are fine in the fridge for up to a week (if they make it that long..) and freeze decently too. As an optional addition, chipotle powder is really, really amazing in the hazelnut sauce.

The nest itself makes a nice little bowl to hold the hazelnut sauce as you peel away layers of the churro and dip them in. 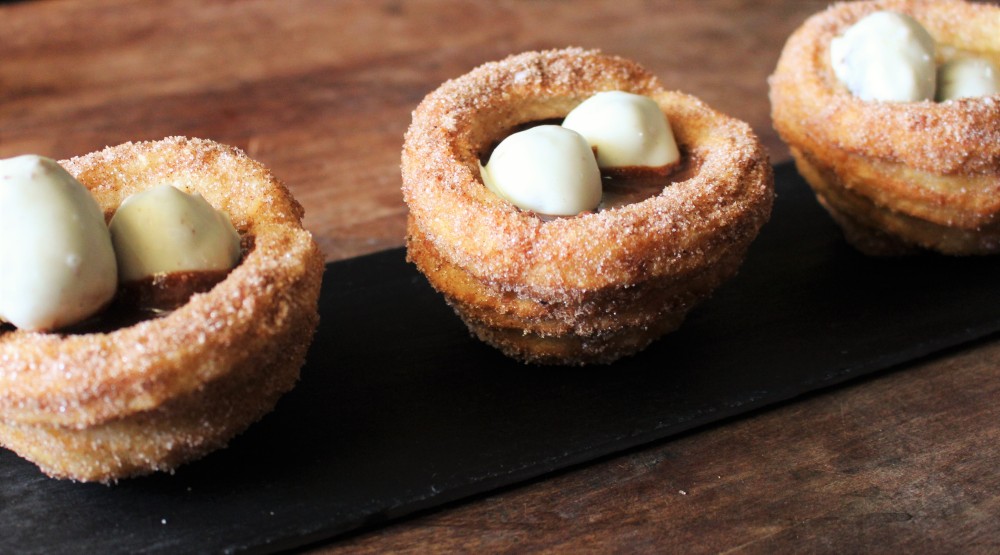 Recipes after the break!

Almond milk horchata – in a small saucepan over medium heat, combine 1/2 cup almond milk with the honey, cinnamon, vanilla and nutmeg. Stir until fully incorporated. Remove from heat and add the rest of the almond milk (1 cup).

In a small bowl, whisk together the dry ingredients (not including the sugar). In a medium bowl, cream together 1 tbsp coconut oil, butter and sugar until smooth. Beat in the egg, then add the yogurt, horchata and vanilla. Slowly incorporate the dry ingredients.

With the remaining tbsp of oil, grease a muffin tin. Pour in cake batter and bake for 25 minutes.

Once cool, finely shred 120g of cake. Mix in the 60g of dark chocolate, stirring until well combined. Using ~1 tbsp of the mixture, form into the shape of a small egg. Once all the eggs are formed, cool in the fridge for at least 30 minutes. Once cool, dip the eggs into the white chocolate. Carefully set the covered eggs on a baking sheet lined with parchment paper to dry. Once dried, you can further shape the eggs using a small pairing knife to remove the excess white chocolate coating.

Preheat oven to 350 and roast the hazelnuts for ~10-15 minutes. Next, pour them into a jar, secure the lid and shake until most of the skins come off, at least a couple of minutes. Discard the skins. Add the nuts, along with the rest of the ingredients, to a food processor. Blend until smooth, adding a little more coconut oil to reach desired consistency if necessary.

~1 quart of oil of choice for frying

a few tbsp of sugar, a little cinnamon and allspice, for dusting

In a medium saucepan, bring the water, sugar and oil to a boil. Remove from heat and mix in the flour until a dense ball is formed. Let cool completely, then add mixture to a piping bag fitted with a tip size of your choosing (in my opinion, using a smaller tip size makes the nests look better but it’s a lot more difficult to squeeze out. The churros pictured are using a standard/wide tip). Squeeze out the churros on a large, parchment-paper lined baking sheet in long ropes. Cool in the fridge for ~30 minutes.

Form the nests by spiraling the churros, making sure there are no holes for the hazelnut sauce to leek out.

In a small saucepan, over medium heat bring the oil to 350 degrees. Fry churros, one at a time, until golden brown (~3-5 minutes). Drain on paper towel then immediately toss in the cinnamon/allspice and sugar mixture.